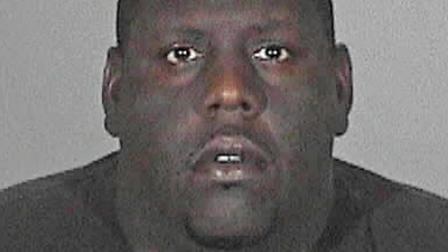 Guerilla Black…ya’ll remember him right? The Compton rapper that had that song with Beenie Man some years back…he sounded and looked like B.I.G.

Apparently hip hop ain’t paying the bills no more because Guerilla Black, real name Charles Tony Williamson, had to do whatever he felt it took to make ends meet. Unfortunately for him that got him arrested Wednesday on suspicion of credit card fraud.

“Manhattan Beach police say the arrests were made at seven locations.During the course of the investigation, authorities learned that Williamson was on pretrial release after being indicted in Washington state on wide-ranging fraud charges.He and the other suspects could face other charges in connection with the alleged local operations, including bank fraud, aggravated identity theft and fraud in connection with computers, access device fraud, use of stolen credit card accounts, receiving stolen property and conspiracy.Authorities say those operations were taking in nearly $20,000 per month.The others arrested along with Williamson include Dwanna LaShaun Franklin of Torrance, Diana Lynn Waller of Hawthorne, Rhazon Zaki Smith of Hawthorne, Reiona Marie Cage of Inglewood and Reiona Marie Cage of Los Angeles”