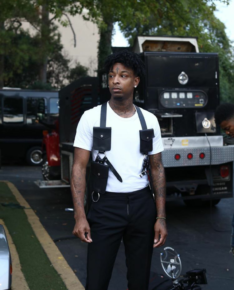 Grammy-nominated rapper 21 Savag was arrested Sunday morning by U.S. Immigration and Customs Enforcement. The agency says he is actually a United Kingdom citizen who overstayed his visa and that he now faces deportation.

ICE says that the rapper, whose real name is Shayaabin Abraham-Joseph, is a citizen of the United Kingdom, according to Cox. The agency alleges that he entered the US legally in July 2005, when he was a minor, but subsequently failed to depart under the terms of his nonimmigrant visa. ICE says Abraham-Joseph became unlawfully present when his visa expired in July 2006.

“Mr. Abraham-Joseph is presently in ICE custody in Georgia and has been placed into removal proceedings before the federal immigration courts,” ICE said in a statement. “ICE will now await the outcome of his case before a federal immigration judge to determine future actions.”
An attorney for Abraham-Joseph said his representatives were working to secure his release.(CNN)