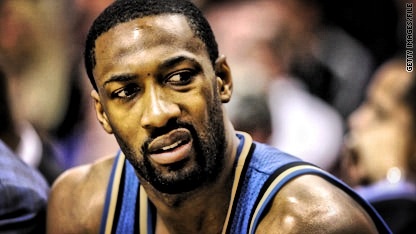 Former NBA star Gilbert Arenas has found himself in trouble with the law again…this time for having a truckload of illegal fireworks.

Law enforcement sources tell us Arenas was pulled over by Califorrnia Highway Patrol around 2:30 AM in Los Angeles for speeding in a Ford pickup — but officers immediately saw that the truck was filled with fireworks … sitting in plain sight in the bed and cab of the truck.

We’re told Arenas was arrested and will be booked for possession of illegal fireworks, and cited for speeding — he was allegedly doing 80 mph — and driving without a license.

It’s unclear exactly how much fireworks were in the truck, but it was enough that LAPD bomb squad was called to handle the illegal booty. (TMZ)