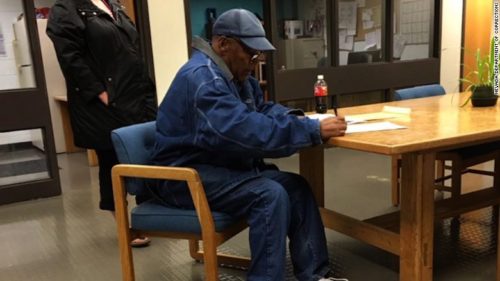 The Juice is loose. After serving nine years for a Las Vegas kidnapping and armed robbery, O.J. Simpson walked out of a Nevada prison a free man. He walked out of prison with paperwork and “three or four boxes about the size of a microwave,” according to Brooke Keast , a spokeswoman for the Nevada Department of Corrections.

Simpson signed his exit papers and was then released from the Nevada Correctional Center just after midnight … minutes after he was eligible to be paroled. The release was stealth, because prison officials wanted to avoid a media crush.

As he walked out, he was told by prison staff, “Don’t come back” … it’s a standard issue farewell. The 70-year-old convict replied, “I don’t intend to.”

A driver was waiting to whisk Simpson away. For now he’ll be staying somewhere in Nevada … he wants to live in Florida but the paperwork hasn’t been processed. Florida Attorney General Pam Bondi is trying to block the move. (TMZ)