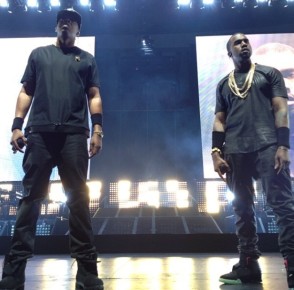 Watch the throne – because frenemies Jay Z and Kanye West are locked in an epic battle over who will become the next baby-making king.

There’s bad blood between the ultra-competitive rappers. First Jay and his wife Beyonce skipped Kanye’s May wedding to Kim Kardashian, then Kanye dissed Jay by omitting his name from lyrics during recent performances.

Now Kanye-who’s well aware of Jay’s long time desire for a second baby to join his two year-old daughter Blue Ivy-is telling friends that he’s going to have Kim pregnant by the end of the summer!

“Kanye is determined to show up Jay and Beyonce, at least in the baby making department,” a rap insider told Dish Nation.

“He’s always felt inferior to Jay, especially as a rhymer and songwriter. And Kanye has been stewing ever since Jay and Bey blew off his wedding.

Kanye is capitalizing on all the bad press Jay and Bey have gotten lately” – over dismal ticket sales for their “On the Run” tour and the infamous post-Met Ball elevator fight involving Solange.

“Kanye thinks having a baby so soon after Nori’s birth will show the world that he and Kim are more solid than Jay and Bey,” says the source.

“The baby issue is a huge sore spot for Jay because Beyonce keeps putting him off because she’s busy with her career. But Kim is totally devoted to Kanye, and she knows that getting pregnant will help extract herself from her family’s reality TV empire, something Kanye has been pushing her to do for awhile. Kanye’s ultimate goal is to overshadow Jay and Bey’s tour with a big, splashy baby announcement.”