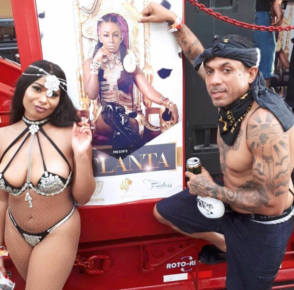 (Gossip-Grind) Is Benzino Getting Abused By His Baby Mama?
Former Love & Hip Hop Atlanta star Benzino’s baby mama Althea Heart was arrested Sunday after she smacked the media mogul upside his head during an argument at her California home on Sunday.

Law enforcement sources tell TMZ … LAPD was called to Althea’s home in the San Fernando Valley to check out a domestic dispute. We’re told Althea wanted Benzino to get out, and he wasn’t cooperating.

Responding officers tried to calm things down, but ‘LHHA’s’ first couple of trouble didn’t disappoint — we’re told Althea whacked Benzino in the head right in front of the cops. She was arrested and booked for misdemeanor battery.

Her bail was set at $20k, and we’re told she bonded out early Monday morning.

Last year Heart filed a Petition for Temporary Protective Order against Benzino in Georgia court. She claimed that he had threatened her, prevented her from calling for help, held her against her will, and was violent in front of her kids.

The judge granted her petition for a restraining order, but following their court hearing, Heart confronted Benzino outside the court, despite the judge’s orders that she not communicate with him, resulting in her being locked up for 10 days.