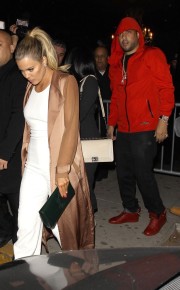 Khloe Kardashian has no shortage of men in her life.

Plenty of “laughs” were shared throughout the night, an eyewitness tells E! News. Khloe could use a night of laughs, too, as the 31-year-old E! reality star recently broke up with Houston Rockets shooting guard James Harden. Since October of last year, she has remained by former NBA player Lamar Odom’s side—literally and figuratively—as he learns to walk and talk again in the wake of his near-fatal overdose. For the first time in a while, Khloe has been able to focus on herself.

Blogs speculated overnight that Khloe and French Montana have reconciled, but a source tells E! News exclusively that their relationship is purely platonic. According to a family source, Khloe is “single.” And in spite of their 2015 split, she and French Montana “remain friends.” So, what’s with the latest reunion? According to the source, the exes see each other “all the time due to their circles being small.”

Khloe may not be thinking about romance at the moment, but her ex apparently is. “French Montana would get back together with Khloe in a second if she would be willing to give it another shot,” another insider tells E! News. “He still loves her so much and never stopped.” While Khloe knows how much the “Off the Rip” Rapper “still loves her, ” the insider adds, “She just wants to remain friends now.”

As for her breakup with James?

“It wasn’t major drama,” the source says. “It just didn’t make sense for her.”

An insider echoed that reasoning when E! News first confirmed the breakup Tuesday. “Nothing really [bad] happened” between Khloe and James, the insider explained. “They just barely saw each other the past few months and it died out.”

Stil, Khloe is grateful for how supportive James was after Lamar was hospitalizaed. “James has been great. He’s been really supportive, really understanding,” she recently told E! News’ Maria Menounos. “But I’ve been honest…I think it’s honest communication just really being honest and hearing [James’] feelings as well—what he’s comfortable with and what he’s not, and I have to respect that.”