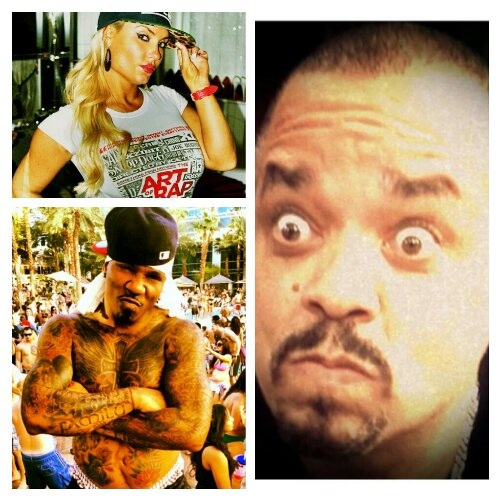 It seems Ap.9 is hell bent on pissing off Ice T. The media whore gives his side of what happened when he and Ice T’s wife Coco met in Las Vegas late last year.

Hollywood Life reports:
“I first met Coco at Surerender nightclub in Las Vegas,” AP.9 tells Star magazine. “She invited me back to her table; I had a couple of drinks; we exchanged numbers. I could tell we had a physical attraction.”“She asked me, ‘What are you doing after the club?’ I said, ‘I’m probably just going to get a room and stay right here.’ She said, ‘Well, I’m going with you.”

“But the most explosive allegation: “We had sex,” AP.9 says. “I don’t know who made the first move. It wasn’t making love; it was just sex.”Another bomb: “We had sex unprotected. I really hope she isn’t pregnant!”

”The rapper says Ice-T actually called him to speak about the incident. “He called me and said, ‘My wife wouldn’t f**k with you. You need to tell the truth because my wife wouldn’t do that.’ So I told Ice-T: ‘You want the truth? OK. Me and your wife had sex!’”

The so called rapper must have a new mixtape or something being released soon…because he’s always mentioning Ice T and Coco’s name (the only way he knows how to get publicity).