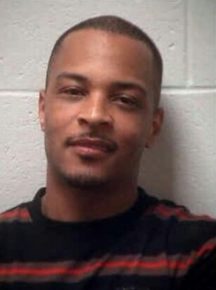 (Gossip-Grind) T.I. Arrested Outside Of His Gated Community In Georgia:

Rapper/actor T.I. was arrested early Wednesday morning on disorderly conduct, public drunkenness and simple assault charges as he tried to enter his gated community outside Atlanta.

“Don’t you know who I am?” the rapper asked the guard, according to the police report.

The music star, whose legal name is Clifford Harris Jr., was arrested after returning to the Eagles Landing community in the 100 block of Eagles Landing Way around 4 a.m., according to Channel 2 Action News.

T.I. did not have his key and argued with a security guard who would not grant him access, Henry County police told the news station. At some point, the rapper called a friend who eventually joined him.

T.I. was arrested on misdemeanor charges of simple assault, disorderly conduct and public drunkenness. His friend was arrested on an outstanding warrant, Channel 2 reported. The friend’s name has not been released.

T.I. was released from the Henry County Jail about 8 a.m. Wednesday after posting $2,250 bond. He did not appear before a judge.(AJC)

“Tip was wrongfully arrested early this morning when he attempted to gain entrance into his gated community – where his wife “Tiny” and his family reside. The guard was sound asleep when Tip arrived at the guardhouse. It took Tip some time to wake up the sleeping guard. Tip clearly identified himself and sought entry. The guard refused entry. Tip was in contact with “Tiny” by phone and “Tiny” confirmed that Tip should be let in immediately. The guard continued to refuse entry without justification. Words were exchanged and apparently the guard and/or a supervisor called the police. When the police arrived, they were not interested in hearing Tip’s side of the story and wrongfully chose to end the situation by arresting Tip.”

Tip responded to the news of his arrest with the following video on Instagram Live:

T.I. responds to the news of him being arrested.