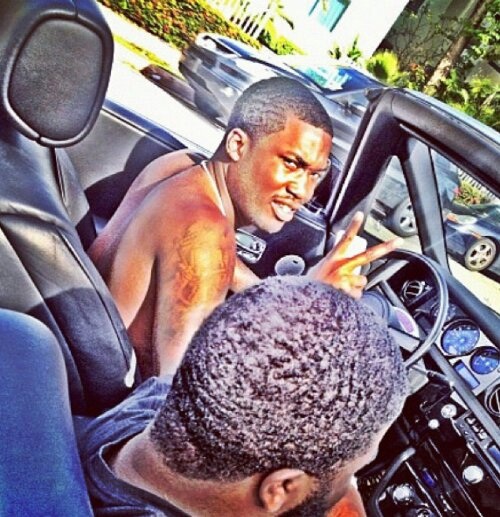 A Philadelphia judge has turned Meek Mill’s dreams into nightmares. The Maybach Music recording artist has been put on punishment for a month and banned from touring. Philly.com reports:

“No tours. No traveling. No performing, except for charity.”

“Less than two months after the release of his first CD, Dreams and Nightmares, a scheduled trip to Africa has been cancelled, and other appearances in St. Thomas and across the United States have also been nixed.And it’s all the fault of Meek’s alter ego, Robert Williams, convicted in 2008 on a criminal cornucopia of charges including selling drugs to an undercover police officer, possessing illegal guns and hiding wads of tainted cash in his dresser drawers.”You need to get yourself together,” Common Court Pleas Judge Genece Brinkley said early on in Monday’s 2-1/2 hour probation hearing that nearly devolved into a shouting match between the defense and the prosecution.”Christmas is dead for him,” Brinkley said. Although this time of year is especially lucrative for performers, she said, “You are going to be home for Christmas and New Year’s.”The central issue, she said, was Williams’ violation of her previous order to stop scheduling performances as of Nov. 16, when he was to appear in court and ask her permission to reinstate his travel permit.”Robert Williams is on probation, not Meek Mill,” said Gary Silver, the most recent in a string of attorneys who have represented Williams/Mill over the last five years. Silver blamed Williams’ booking agents and managers for planning tour dates during the prohibited period, but argued that the restrictions were unreasonable in any case.”