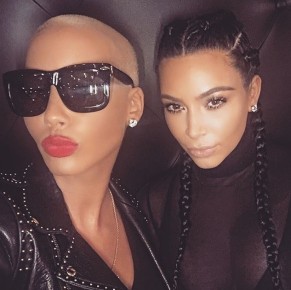 Kanye West’s (or any man for that matter) worst dream came true last night. West’s wife and his ex-girlfriend were in the same place at the same time. It’s not known if Kanye was also in the building, but wherever Yeezy was at he was probably nervous as hell, being that it’s been less than a week since Rose blasted him on Twitter for disrespecting her and her son during his war of words with Rose’s ex-husband Wiz Khalifah.

During the Twitter beef that started with Wiz criticizing West’s album title, Kanye tweeted “You let a stripper trap you,” and went on to say “You wouldn’t have a child if it wasn’t for me,” and “You own waves???? I own your child!!!!”

After catching wind of those comments, Rose retaliated, asking West if he was “mad I’m not around to play in ur a–hole anymore?” She added the hashtag #FingersInTheBootyAssBitch to her post. West later apologized for mentioning Rose’s son Sebastian.

Apparently there’s no hard feelings between Amber and Kim, because not only were the two able to be in the same building at the same time, but the pair also took a selfie together and posted the picture on Instagram.

Kardashian captioned the photo “Tea anyone?”, and Rose posted the same image with the caption, “Swingers” and a frog emoji and cup of tea.

Is this what Kanye West meant when he said, “Me and my wife got the kind of love that can turn exes into best friends.”