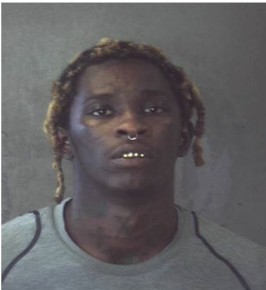 Atlanta based recording artist Young Thug was arrested by U.S. Marshals early Wednesday over an incident where he allegedly threatened to shoot a mall security guard in the face. The incident took place last week at a mall in Georgia, but Williams left before the cops showed up.

The 23-year-old rapper, whose birth name is Jeffery Lamar Williams, was arrested without incident around 6 a.m. at a residence in Sandy Springs, according to Jim Joyner, spokesman for the U.S. Marshals Southeast Regional Fugitive Task Force. The U.S. Marshals were helping Dunwoody police serve a warrant charging Williams with terroristic threats.

Dunwoody Police Department spokesman Officer Timothy Fecht said the charges were the product of a July 7 “dispute that Mr. Williams had with Perimeter Mall security.”

Photos: Celebrity arrests 2015
According to an arrest warrant, Williams was asked to leave the mall and was being escorted out when he “threatened to shoot (a security guard) in the face.”

No further information was available regarding the original incident, but Channel 2 Action News reported that Dunwoody and Sandy Springs police, as well as federal agents, also executed search warrants Wednesday at Williams’ home.

Joyner said Williams would be taken to the DeKalb County jail for his initial appearance and bond hearing.(AJC)