Drake made Rihanna feel like the only girl in the world Sunday night.

After being “stuck in traffic” and missing most of the 2016 MTV VMAs at Madison Square Garden, the rapper, 29, showed up to present his girlfriend with the Michael Jackson Video Vanguard Award. Drake sang Rihanna’s praises, saying, “She’s someone I’ve been in love with since I was 22 years old. She’s one of my best friends in the world. All my adult life I’ve looked up to her, even though she’s younger than me. She’s a living, breathing legend in our industry.”

After giving Drake a sweet (albeit slightly awkward) kiss, Rihanna, 28, took a moment to reflect on the magnitude of the moment. “When I think about the Vanguard Award and receiving this tonight, all I could think of was my country. They’re gonna be so proud. This is the first Vanguard to land anywhere close to my country,” she explained. “It’s not my own—it’s my family’s. It’s my fans’. It’s my country’s. It’s the Caribbean’s, as a whole. It’s women. It’s black women.” She thanked her collaborators “for supporting me over and over”—her boyfriend among them. “Thank you, Drake, for that,” Rihanna said. “Thank you MTV. I had so much fun!”

Throughout the nearly three-hour telecast, Rihanna brought down the house as she performed a medley of her biggest hits, including “Don’t Stop the Music,” “Only Girl in the World,” “We Found Love,” “Where Have You Been,” “Rude Boy,” “What’s My Name,” “Work,” “Needed Me,” “Pour It Up,” “Bitch Better Have My Money,” “Stay,” “Diamonds” and “Love on the Brain.”

After the show ended, Drake posted an Instagram picture of himself giving Rihanna a kiss on the cheek. “This is a night for us all to be thankful for what you have done for us!” he wrote. “You have affected so many of our lives in the best way possible. Tonight we celebrate you!”

For the next few hours, Rihanna and Drake slipped away before they reappeared at Up&Down nightclub around 3:15 a.m. Hailey Baldwin, Taylor Hill, Jaden Smith, Jasmine Tookes and more were already partying by the time the couple arrived with friends and a few bodyguards. “They were holding hands when they walked in,” a source tells E! News exclusively. “Many people left at that point in the night, but they seemed like all they cared about was each other anyway.”

The “Too Good” collaborators “didn’t leave each other’s side,” the source adds. In fact, “Drake didn’t let Rihanna out of his sight” the entire night.

It was a time for “drinking and dancing”—and that’s exactly what they did. 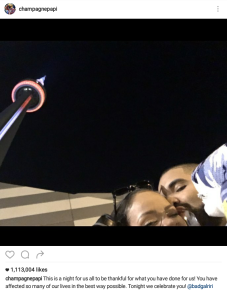