Over the last few days, a strange phenomenon has started to take place in the #maga movement among Black Trump supporters. It seems that there is a massive divide taking place which feels kinda like a “we told you so” but I digress.

Finally got a HD version of this 😭😭… BlackFreeAgency is the future… #Blexit is political Flat Tummy Tea… No Party Owns Our Votes … They have to EARN THEM #EmancipateYourVote … pic.twitter.com/KVfka26yJf

Donald Trumps protege Charlie Kirk CEO of TPUSA, who is the age of a dude who just graduated college has been all up and down Twitter disrespecting black folks for years, put on a Young Black Leaders Summit in Washington D.C which to normal black folks was beyond laughable because none of us even know anything about Charlie Kirk except that Wikipedia says he is a Nazi.and he incites anger via his anti-black tweets. (honestly are these people brain dead? If his google search says “Nazi” how in the world will he ever be trusted? at least find someone who doesn’t have a billion articles calling them the kkk and is a republican then we might believe the whole “Blexit” thing) ) Yes for some reason TPUSA thinks fake news works on the black community. Not a single black media outlet covered the event or ever talk favorably about these people so how on earth they have fooled themselves into believing they have black support is beyond me.

If Mainstream black media like XXL or Bossip.com do not endorse the black event then it is fake news because BET would have surely written about this “Historical event for African Americans” regardless of how they feel about President Trump. Black media always gives credit where it is due.

So we caught up with Matthew Hardy who was made viral after Uber refused to service for his hat. Hate crimes against black people on both political sides are an issue. Matthew was kind enough to speak with us about the backlash TPUSA was recieving on Twitter from high profile black Trump supporters like Hotep Jesus, Sharika Soal and other hoteps we all love.

Hey Matthew we heard that members of TPUSA have treated you poorly can you tell us a little bit about your experience
My experience with TPUSA hasn’t been pleasant. Months prior to the Young Black Leadership Summit, I had been in contact with a representative from TPUSA. He and I spoke on many different occasions, and we both came to an agreement that I’d be a perfect fit to speak at this event. The moment I questioned Candace Owens genuine involvement with the black community, I was outed by TPUSA officials. One gentleman affiliated with the organization took to his Facebook, denouncing my involvement and denied that I had been invited as a confirmed speaker. He told me that in order to participate, I had to be fully onboard with Candace Owens, no questions asked. When I disagreed to do that, he pulled the plug and said I was not welcome at the event.

How long have you been a Trump supporter

I have been a Trump supporter for two years. Brandon Tatum likes to call himself the Noah of this generation. He said he built the ark and he’s been calling for black people to come along and joint he conservatism bandwagon. I take offense to that because while he and Candace Owens were praising Barack Obama, I had already been campaigning for Republican candidates and was a prominent supporter of John McCain in 2008 and Mitt Romney in 2012. Mr. Tatum, I was a black conservative before it was cool or a cute label.

When did you come to the conclusion that Democrats are not what is best for the black community?

I was raised in a very independent household. My parents taught me never to put all my eggs into one basket, but also stand for something. I watched many family members struggle in life. It wasn’t because they were lazy, uneducated or not willing; it was because they were being held back. I learned at a very young age that the democrats want to see people of color in a state of dependency because that’s how they get their votes. If you want a handout, you vote democrat. If you want a hand-up, you vote republican.

After seeing the disrespect towards the black community how do you feel about President Trump do you still support him and why?

I definitely still support President Trump. I think he has done exceedingly well thus far. Black and the Hispanic unemployment rate is the lowest in record history. The economy is booming. We are getting our manufacturing jobs back here in the states. And in Kentucky, my home state, agriculture is flourishing because of the incentives of his policies. However, I would like to encourage the president to watch who he lets into his inner circle. People do not care how much you know or who you know until they know how much you care. President Trump should sit down with real black conservative leaders and real black Americans that are struggling. He praises Candace Owens, but she can’t speak for the black community when she doesn’t even make herself available to the members of the black community. Not just her, but so many other notable black figureheads that haven’t furthered the black conservative movement, but their own personal agenda of trying to become relevant

Do you feel the TPUSA summit should have sent invites to black people who then had to ask people to help them afford the meeting?
I personally do not think TPUSA should have ever extended invites to people that couldn’t afford airfare, without intending to at least offer to help them with the expenses. You want them there but aren’t willing to pay travel expenses to get them there. I paid for three individuals to go, not because I knew who they were but because I have and always will support any young leader truly wanting to make a difference. I saw how much they wanted to attend this event, they contacted me and I made it happen. And for TPUSA to deny the fact that I was one of the first to receive an invite and was the first confirmed speaker, I feel shunned by the whole organization. I am highly upset with TPUSA and their dishonesty. So much so that I have denounced all support for that organization and do not wish to hear from any TPUSA officials unless they are rendering an apology. 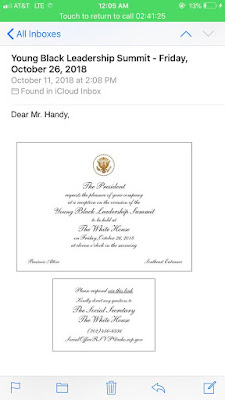 From a Proud Trump supporter, the Young Black Leadership Summit was a monkey show. You had people wearing jeans, beanies, and jersey to a White House event. The attendees didn’t take this event seriously, and most were classless. I am glad I didn’t attend such a lowly summit with individuals that couldn’t even respect the White House enough to dress and act the part.
Again, I do not want any TPUSA officials reaching out to me unless they are apologizing. I will not recant my statements. I said what I said”

How shameful; If TPUSA would have just done like MLK and invited an actual Black leader like Sharika Soal or any verified accounts that black people actually listen to for that matter… from the left and the right this would have actually been a moment for healing mistrust but all that has been accomplished is making blacks from both the left and the right question the motives of Trump supporters. Which is again like a “we told you so|”  If TPUSA was smart they would never ever disrespect the black community via disrespecting our leaders. Can’t have an event meant for our leaders and not invite them I hope Trump gets the hint,TPUSA and Candace Owens are never going to be accepted by us and especially after a stunt using our people like we can’t tell when we are being used as props.