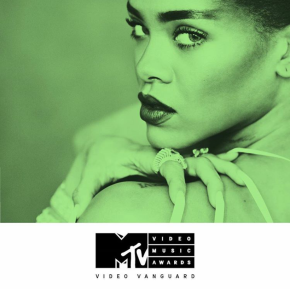 The “MTV Video Music Awards” will bestow Rihanna with its highest honor, the “Michael Jackson Video Vanguard Award,” for her decade-long impact on music, pop culture, fashion, film and philanthropy. Rihanna will perform during the ceremony LIVE from New York’s iconic Madison Square Garden on Sunday, August 28 at 9:00 PM ET/PT.

Two-time VMA “Video of the Year” winner and the youngest solo artist to score 14 No. 1 singles on the Billboard Hot 100—the fastest to do so, Rihanna’s unparalleled output of hits have spawned some of today’s most memorable music videos from “Umbrella” to “We Found Love,” “Diamonds” and her most recent collaboration with Drake on “Work.”

It is hard to believe that Rihanna is only 28 years old, yet within the 10 years since the start of her musical career, she’s sold more than 61 million albums and 215 million tracks worldwide. Rihanna is the “Best Selling Digital Artist of All Time… with more than 100 million [RIAA] Gold & Platinum song certifications” and an eight-time Grammy Award winner who also counts 14 Billboard Music Awards among other countless music accolades. Aside from her musical achievements, Rihanna is bona fide business woman with multiple entrepreneurial ventures. However, most importantly, her undeniable cultural influence has forever imprinted her in history as a Global Icon despite her young age.

With over 81 million Facebook fans, 64 million Twitter and 42 million Instagram followers, Rihanna is putting her influence to good use via additional philanthropic efforts. Chief among these is her own Clara Lionel Foundation. Established in 2012 and named after Rihanna’s beloved grandparents Clara and Lionel Braithwaite, the foundation works to improve the quality of life for communities globally in the areas of health, Education, arts and Culture.

Fans can vote for their favorites in VMA categories including, “Video of The Year,” “Best Male Video,” “Best Female Video,” new category, “Breakthrough Long Form Video” and more by visiting vma.mtv.com. Vote across all categories to enter to win the chance to go to the VMAs in NYC, thanks to Verizon, the presenter of this year’s award voting. Additionally, voting for the “Best New Artist” award, presented by Taco Bell®, will remain live through the 2016 “MTV Video Music Awards” Pre-Show airing at 8:00 p.m. ET/PT and new this year, fans can cast their votes for the category via Facebook Messenger (starting 8/15). The top two artists will be revealed during the pre-show, kicking off a live hashtag vote with the winner being announced during the live main telecast.