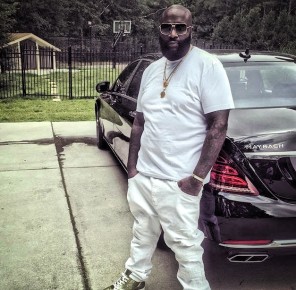 Rick Ross’ infamous lyrics on the U.O.E.N.O. remix have come back to haunt him once again. In the song Ross describes drugging a woman’s drink, rendering her unconscious, and then having sex with her.

A woman, being identified as Jane Doe, is suing the rapper because she claims that she was allegedly drugged and sexually assaulted by an associate of Ross.

The woman — who is ID’d as Jane Doe in the lawsuit — claims she was at the W Hotel in L.A. where she met up with Rick and his entourage, who had invited her to go to Cannabis Cup … a weed convention.
She says she got in the van with Rick, a guy named Thaddeus “Black” James, a DJ, 3 security guards and the driver. She says she was offered a glass of booze and shortly thereafter became dizzy and eventually passed out.
She says the next thing she knew, 2 hours had passed and she was in the van with Black.
The woman says she went back to Black’s hotel room and passed out again. She woke up at 8 AM, examined herself and realized her clothes had been removed and she had been sexually assaulted.
The woman believes Black is the one who raped her.
She’s suing Black but also Rick Ross … because she says Black was Ross’ agent and he should have been supervising him, and it was Ross’ van. (TMZ)