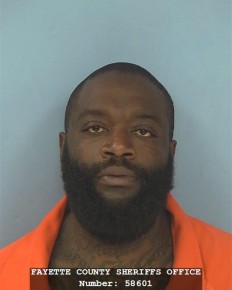 Rapper Rick Ross has found his way back inside the Fayette County Jail. Ross and his bodyguard were denied bond by a Fayette County judge following their Wednesday morning arrest on assault and kidnapping charges. 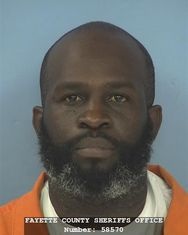 Ross, whose real name is William Roberts, was arrested Wednesday morning by the Metro Atlanta Fugitive Task Force on outstanding warrants for aggravated assault.
Ross’ bodyguard, Nadrian James, was also arrested.
According to an arrest warrant, Ross was having work done on property that he bought in Fayette County. Ross and James allegedly got into a fight with one of the workers and pistol-whipped him. The report says the men hit Jonathan Zamudio several times with a gun and chipped two of Zamudio’s teeth. Zamudio also suffered serious neck and jaw injuries, according to the warrant.
The warrant says the pair held Zamudio against his will at a guest house.
Both men are charged with kidnapping, aggravated assault and aggravated battery.
Ross went before a Magistrate Court judge on Wednesday morning. The judge told him that he will have to remain behind bars until a bond hearing can be held in Superior Court. (WSBTV) 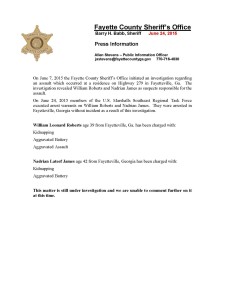