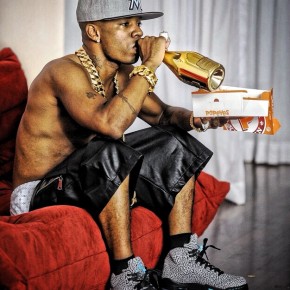 Rapper Plies was body slammed on stage by a fan during a concert in Tallahassee, Fla., on Friday night (April 3). The fan was invited onstage by the rapper, after Plies noticed that he was being thrown out of the venue, things went sour very quickly after that.

The “Becky” rapper was performing Friday night in Tallahassee, FL and invited the fan on stage.
But things turned real ugly real fast, when the fan got way too close to Plies. You hear the rapper warn the guy he’s in his space, and then the fan snaps — apparently he felt Plies was embarrassing him.
The fan then bear hugs the rapper and throws him off the stage. Everyone then goes insane.
The fan was thrown out of the building, courtesy of security. The crazy part … Plies got right back up on stage and continued rapping as fights were breaking out in the crowd.
The attacker went home and started uploading videos … explaining his side. (TMZ)

I hope Plies fired his entire security team after the show, because they just stood there and let it happen. They’re getting paid to protect this man, and they were a miserable failure.