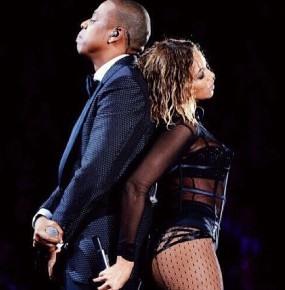 Boy I tell you,.. ever since the power couple opened up the 56th Annual Grammy Awards, they name have been ringing bells not only positively—but negatively as well.

First, the British tabloids calls Bey a whore for being overly sexy and loving towards HER HUSBAND on stage, and now the NY Post is blasting Jay for allowing his lovely wife to be so sexual on a stage performing in front of millions..

I see exactly why they don’t give a DAMN what the media say, because first it was a problem that they rarely showed each other affection in public, and now when they do, they’re criticized for that too… Read more