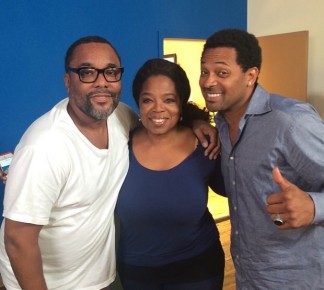 The highly anticipated Richard Pryor biopic is finally coming to the big screen and Dish Nation got an exclusive interview with its star, Mike Epps.

“The Hangover” actor and standup comic got the approval of filmmaker Lee Daniels, Oprah Winfrey and Pryor’s widow, Jennifer Lee Pryor, but it’s the iconic former talk show host that has him all worked up.

Winfrey was cast to play the legendary comedian’s colorful grandmother Marie Carter, who raised Richard while also running a house of prostitution.

Epps joked about the possibility of getting bitch slapped by Oprah when they start filming the project in January.

“Oprah’s got a backhand out of this world, she ain’t slapped me yet, but it’s coming,” Epps, who stopped by the studio in Atlanta with the Rickey Smiley crew said. “You know one thing about Oprah Winfrey, she’s a mega icon. I’m like, ‘Man, that’s Oprah Winfrey right there.’ And Lee Daniels, he busted me out in front of Oprah. He said, ‘Man, stop looking at her like it’s Oprah and just do the thing.’ I was like, ‘OK, all right, I’ll do it.’”

The starstruck 43-year-old clearly has his priorities in order when it comes to working with Oprah.

“I can’t wait to get a selfie picture with her, you know what I’m saying?”

Before Mike left he dropped a little bombshell about the ill-fated film “Nina,” starring Zoe Saldana as Nina Simone.

Epps, who played Pryor in the already completed biopic about the jazz singer-songwriter-civil rights activist, revealed that the troubled film may never see the light of day.

“I played Richard Pryor as an older guy in the Nina Simone movie, which I don’t know if it’s coming out or not.”