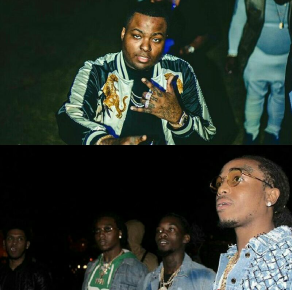 (Gossip-Grind) Did The Migos Beat Up Sean Kingston?

Rumors are circulating that Sean Kingston was beat up Tuesday by Atlanta rap group Migos. There are few details available, but the alleged altercation was believed to be related to the Migos ongoing beef with Soulja Boy.

Law enforcement sources tell us it went down late afternoon at the Sands Expo and Convention Center in Vegas. We’re told Kingston and the guys from Migos got into it over an argument involving Soulja Boy and the 3 members of Migos beat Sean badly, allegedly kicking him and stomping on his head.

Law enforcement tells us someone from Sean’s camp pulled out a gun and fired once, but didn’t hit anyone. That person was detained by security and turned over to the Vegas PD.

By the time cops arrived both Sean and Migos had left. A short time later Sean was pulled over for a traffic stop and became “semi-cooperative,” though he did not name names.

We’re told police want to speak with Migos, but they are quick to add members of the group are not “wanted” by cops.(TMZ)

The Migos were seen hanging out with Kingston before the alleged incident occurred.

#Migos was hanging out with #SeanKingston before their alleged altercation.