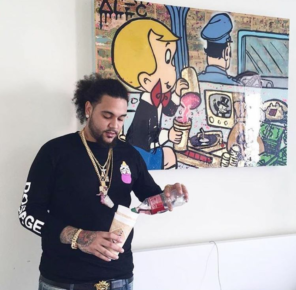 The Miami music producer who was known as the self-proclaimed “CEO of lean” is on his way to jail. Harrison Garcia a.k.a. “Cuban Harry” received 30 years in prison, after he was convicted of armed drug trafficking.

The 27-year-old admitted to supplying celebrities (including Lil Wayne and Chris Brown) with lean.

U.S. Judge Patricia Seitz said Garcia’s crimes were serious against the backdrop of a national drug epidemic that “dehumanizes and enslaves” addicts. “It is the kind of conduct that is very much a scourge on our community,” Seitz said.

“I want to briefly apologize to my parents and your honor,” Garcia said. “Hopefully, I learn from this.” (Miami Herald)

According to federal prosecutors, Garcia was responsible for pumping the South Florida music scene with “purple drank”, a mix of promethazine with codeine, soda, and Jolly Ranchers also known as “sizzurp” and “lean.”

The government contends not only did Garcia supply major music stars, but he also was the leader of a crew of robbers who broke into drugstores to obtain the expensive ingredients.