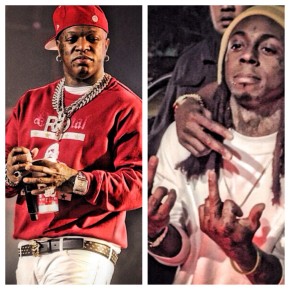 The battle between Lil Wayne and his longtime recording home Cash Money continues to heat up. Lil Wayne is reportedly preparing to sue the label for $8 million. The rapper also wants a judge to grant him his freedom from his recording contract. Wayne announced that he wanted “off this label and nothing to do with these people” back in December.

As TMZ reported … the 2 titans tried coming to terms this week but it wasn’t meant to be. Now Wayne will ask a judge to declare him free of Cash Money and Birdman’s control. Wayne says Birdman has violated their contract by withholding the release of his new album.

As for the $8 MIL claim … Wayne says Birdman owed the money for his latest album — it was supposed to be an advance.

Birdman has held firm … he will release the album “in due time,” but clearly that’s not good enough for Wayne.

We’re told Wayne will keep recording but he will release his works outside of the Cash Money umbrella. (TMZ)

On his latest mixtape Sorry 4 The Wait 2, Wayne addressed his issues with Birdman on his “Coco” remix:

Who kept this shit together? Nigga, me, that’s who
Who was there when niggas left us? Nigga, me, that’s who
Cash Money is an army, I’m a one man army
And if them niggas comin’ for me, I’m goin’ out like Tony
Now I don’t want no problems, I just want my money
Ain’t gotta hold no conversation or my luggage
Tell whoever’s countin’ that I’m on a hundred
Birdman Jr., more like Ugly Duckling