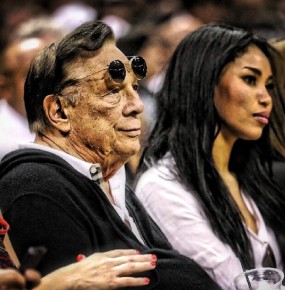 LA Clipper owner, Donald Sterling is the latest racist to make headlines for his incendiary remarks about African-Americans and basketball icon Magic Johnson. Apparently, Mr. Sterling, who the majority of his players are black would prefer if blacks did not attend his games and one person specifically, he does not want to see is Magic Johnson.

These comments were recorded by Donald Sterling’s girlfriend V. Stiviano during a phone conversation. It seems like Sterling took issue to his girlfriend taking a picture with Magic Johnson and then posted it to Instagram.

You can sleep with [black people]. You can bring them in, you can do whatever you want. ?The little I ask you is not to promote it on that… and not to bring them to my games.

Magic Johnson released a response to Sterling’s comments and challenged him on his racist views being that the Clippers’s majority players are blacks.

It’s a shame that Donald Sterling feels that way about African-Americans. He has a team full of amazing African-American basketball players that are working to bring a championship to Clippers fans. The Clippers also have a strong minority fan base.

In the end, Sterling’s wife Rochelle Sterling decided to divorce. Timing is everything!