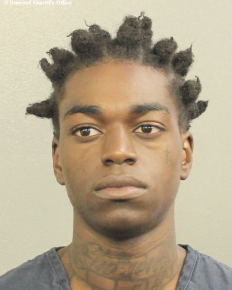 South Florida rapper Kodak Black caught a break in court today. A judge ordered him to be released from jail after he accepted a plea deal that would put him on house arrest and probation. The judge reminded Kodak that if he makes another mistake he’ll be facing 55 years in prison.

Black, whose real name is Dieuson Octave, changed his plea from not guilty to no contest in the two criminal cases that had put his music career on hold, court documents show.

The 19-year-old rapper, who grew up in a Pompano Beach public housing development, pleaded no contest to numerous charges including robbery, false imprisonment, fleeing a law enforcement officer and possession of a firearm by a delinquent.

He was sentenced to 12 months of house arrest in an undisclosed location about 50 minutes from where he grew up in South Florida, followed by five years of probation. (Sun Sentinel)

Message to Kodak Black: STAY YOUR LIL ASS OUTTA TROUBLE AND KEEP YOUR MIND ON YOUR PAPER.