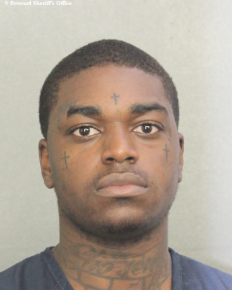 (Gossip-Grind) Kodak Black Back In Jail:

South Florida rapper Kodak Black was arrested Tuesday in a Broward County courtroom for violating his probation. Kodak, whose real name is Dieuson Octave, violated his probation from a previous drug arrest on which he was sentenced to house arrest and probation.

Last September, Kodak was sentenced to 120 days in St. Lucie (Florida) County Jail after pleading guilty to a misdemeanor charge of possession of less than 20 grams of marijuana and possession of drug paraphernalia. He was released on Nov. 28, 2016, only to be extradited to Florence, S.C., where he had been charged with sexual battery following an incident that allegedly occurred in a hotel room last February. On Dec. 1, he posted $100,000 bond and was officially out of jail in South Carolina.(Billboard)

Despite being confined to an approved residence in Pembroke Pines unless he was working or doing public service, Octave, 19, was seen on video at a strip club called Club Lexx in Miami and at a Adrien Broner boxing match in Cincinnati.