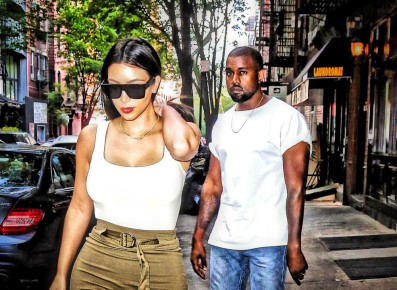 ​Everybody knows Kanye West has a lot of excess baggage, but the rapper’s fed up wife Kim Kardashian forcing him to shed some of it—namely, the 15 pounds of weight and the spare tire he gained since their daughter North’s birth last June.
“Kim is cracking the whip on Kanye,” a family friend told Dish Nation.

“Kanye has turned into a slacker. He grabs a lot of junk food on the go, and like so many new dads, he’s porked up.”

“Kanye breathed down Kim’s neck to quickly get back into shape after she gave birth, so she’s giving him a taste of his own medicine.”

Kim, 33, endured merciless bullying over her pregnancy weight gain. But she lost 55 pounds in a matter of months, through strenuous workouts—including an on-call personal trainer and 100 squats a day—and by following the Atkins diet.

Meanwhile, the 37 year-old musician-turned-designer is getting creative about covering up his expanding gut, including wearing oversized T-shirts that “make him look like a potato sack on two legs,” says the source.

“She signed him up for workouts with her trusty trainer (Harley Pasternak), but Kanye blows off most of his private training sessions. Kim also nags Kanye to join her at Soul Cycle or Barry’s Bootcamp, but he refuses, giving weak excuses about being too busy.”

“Kanye is beginning to sympathize with Kim’s brother Rob, who the family constantly fat-shames. Kanye asked Kim to back off, and, in turn, he promised to slim down a little by the end of the summer.”