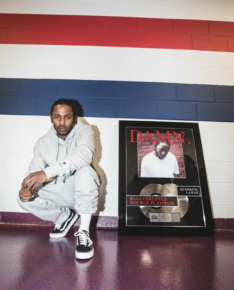 Rapper Kendrick Lamar has made history again, becoming the first hip hop artist to win a Pulitzer Prize for music. Kendrick is the first honoree to have a number 1 album or go platinum, the award is typically given to classical or jazz musicians.

Kendrick’s album DAMN won best rap album at this year’s Grammy awards. His song Humble off of the album won best rap performance, best rap song and best music video, and many believe that DAMN was snubbed for the album of the year honor.

In news that caught many off guard, celebrated Compton-born rapper Kendrick Lamar was awarded the Pulitzer on Monday for his work on his 2017 album “Damn.” With the announcement, the committee praised Lamar’s album as “a virtuosic song collection unified by its vernacular authenticity and rhythmic dynamism that offers affecting vignettes capturing the complexity of modern African-American life.” (LA Times)