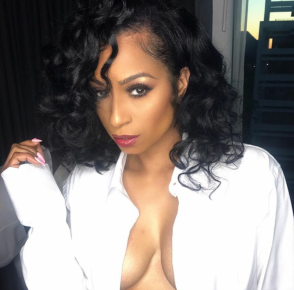 Rapper/promoter Pharoah recently filed a restraining order against Love & Hip Hop: Atlanta star Karlie Redd. Karlie has to stay at least 200 yards away from him.

Cops tell TMZ …Christopher Powe ﻿– aka Pharaoh — filed a report saying he and Karlie had a lover’s spat early Thursday in an Atlanta hotel room and she went nuts, threatening to tell people he raped her.

Sources close to Powe claim Karlie was drunk, and went off on him when he tried to leave the room. That’s when she locked herself in the bathroom, and threatened to flush his stuff — including 2 phones.

Powe says he bolted and went to get hotel security, but when they got back … Karlie had taken off and left his belongings in the room safe.

Her rep admits Karlie locked herself in the bathroom, but only to protect herself from Powe. The real twist here — she’s claiming she caught him trying to take pictures of her sleeping, and he’s only lying to cover it up.

Karlie will be back in court to fight the restraining order later this month.(TMZ)

This ordeal will more than likely be a part of Karlie’s storyline on the next season of Love & Hip Hop.