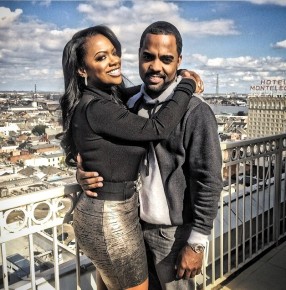 The Real Housewives of Atlanta stars Kandi Burruss and Todd Tucker are now officially man and wife. The couple married yesterday in a private ceremony held at Le Fais do-do in Atlanta. The ceremony was filmed for an upcoming Kandi and Todd wedding special on Bravo.

A rep for the Real Housewives of Atlanta star confirms to In Touch that Kandi and TV producer Todd Tucker wed in a beautiful ceremony in Atlanta on April 4.

“This is one of the best days of my life! I never imagined that I would marry my best friend. Todd’s been that to me,” Kandi exclusively tells In Touch. “And to have just had the wedding of my dreams, it’s all been so beautiful. Now it’s time to party!”

The couple met in 2011, during filming of the fourth season of the hit Bravo reality series and got engaged January 2013. Kandi has one daughter, Riley, 11, from a previous relationship. This is the first marriage for Todd.

Congratulations to the happy couple!