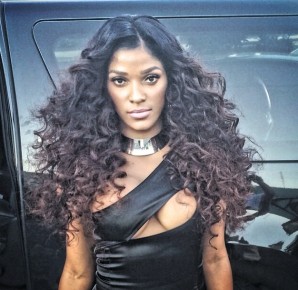 The cast of Love and Hip Hop: Atlanta are still feeling the aftermath of last season’s reunion show. Recently cast members Benzino, and Althea were terminated by VH1 for the part that they played in the reunion show brawl.

Gossip-Grind has learned that an arrest warrant has been issued for Joseline Hernandez, after co-star Althea filed charges against her with the New York Police Department.

The reunion turned into a massive fight, with castmates Benzino, his fiancée Althea, Stevie J, Joseline, Debra, Tammy, and Mimi all duking it out.

Althea filed a police report, claiming Joseline was the instigator, and apparently the NYPD saw it Althea’s way … because there’s now an open case against Joseline. If she comes to NYC and gets pulled over or they spot her, she’ll be arrested for the alleged crime and possibly face charges.

Since the brawl … Benzino and Althea got the boot … and Althea filed suit against Joseline, claiming she was high on cocaine during the fight. She was served at her home last week. (TMZ)