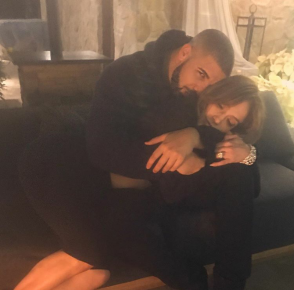 (Gossip-Grind) Jennifer Lopez Is ”Having Fun” With Drake

This was a couple that no one really saw coming, and now everybody wants to know what the real deal is between Jennifer Lopez and Drake.

Well, it seems like you can put the cynicism aside, because a source tells E! News exclusively that this budding romance is 100 percent legit, and not a professional ploy to promote any type of business like many are assuming.

However, with that said, these two aren’t exactly gearing up to go get matching tattoos or anything like that any time soon.

The insider adds that J.Lo is enjoying her time with Drizzy as a friend and companion, but isn’t considering him as a potential serious boyfriend at this stage of the game. “She’s having fun,” the source tells us.

Especially since the insider also believes that Lopez’s ex Casper Smart isn’t entirely out of the picture.

“I think she and Casper will get back together,” the source adds, confirming that although J.Lo and Smart are no longer speaking as frequently as they once were, the lines of communication are still open.

“He’s a great guy and she’s knows it. They just need a break right now.”

Lopez and Drake have been making numerous headlines this last week due to their outings together and heightened display of affection towards one another on social media.

They originally sparked romance rumors in early December when Drake attended two of Lopez’s Las Vegas concerts back-to-back (pun intended). Not long after that, the rapper hosted “a super intimate dinner” at Delilah in West Hollywood, which he left alongside the Latin superstar.

Speculation then skyrocketed when they posted photos on Instagram earlier this week of J.Lo cuddling up on Drake’s lap while he wrapped his arms around her.

Just last night, the pair attended a fake winter wonderland-themed “prom,” during which they were crowned king and queen (because, duh). After celebrating the sweet moment, they spent the night dancing up on each other, and even shared a kiss on the lips.