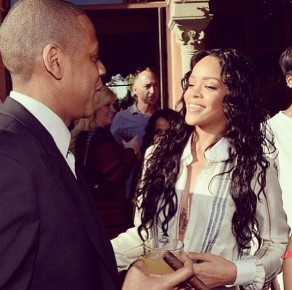 Jay Z is so enamored with his superstar wife’s style and image that he’s urging his longtime protégé Rihanna to clean up her bad girl image by dressing and acting more like Queen Bey.

The rap mogul – who discovered the Barbados-born beauty nearly a decade ago — recently signed Rihanna to his Roc Nation record label.

“He wants her to ditch the sheer dresses” – like the nearly nude one she wore to the June 2nd CDFA Awards – “and the marijuana logos and references. 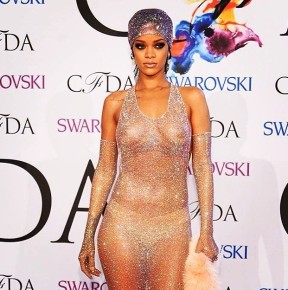 “Jay warned Rihanna that he runs a tight ship. He suggested she tone down her drinking, smoking and partying and go on juice cleanse to rid her body of toxins.

But the Jigga Man pulled out the big gun when he asked Beyonce – whom Rihanna once referred to as “gorgeous, a stab to my self esteem” – to mentor the ‘Diamonds’ singer.

Says the source, “Beyonce is giving Rihanna tips on speaking more eloquently in interviews and she went through her wardrobe and tossed out some of the wilder stuff, like too-short denim daisy dukes and leather chaps.

“Beyonce also suggested less garish wigs and makeup, and she’s pushing for a moratorium on Rihanna getting anymore tattoos.

“Jay also banned Rihanna from any future communication with Chris Brown and he was a driving force behind Rihanna dumping Drake, because he’s dissed Jay in the past.”