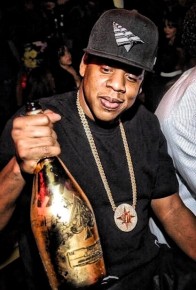 Hip hop mogul and businessman Jay Z recently purchased the Armand de Brignac champagne company for an undisclosed amount. Also known as “Ace of Spades”, due to its distinctive gold design, the brand has long been a favorite of the rap star.

Jay-Z has bought the Armand de Brignac champagne business for an undisclosed amount. The champagne is known as “Ace of Spades,” and is produced by eight people in the French town of Chigny-les-Roses, the BBC reports. It was featured in at least one Jay-Z music video and sells for $300 per bottle.

The 44-year-old rap mogul (and businessman) is known for his love of champagne. Jay-Z raps about the Ace of Spades brand in his song “On To The Next One:” “I used to drink Cristal, the muhf***ers racist, so I switched gold bottles on to that Spade sh**” Jay-Z raps. In the music video for the song, you can see the Ace of Spades champagne flash onscreen about one minute and 57 seconds in. (Time)

“We are proud to announce that Sovereign Brands, a New York-based wine and spirits company owned by the Berish family, has sold its interest in the Armand de Brignac (‘Ace of Spades’) Champagne brand to a new company led by the globally-renowned Shawn ‘Jay Z’ Carter.”