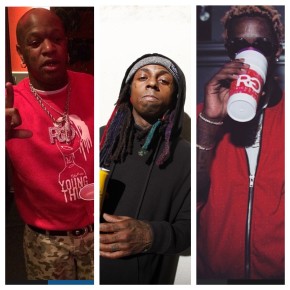 Young Thug and Birdman have been named co-conspirators alongside Young Thug affiliate Jimmy Winfrey (or Peewee Roscoe), the three allegedly conspired in a plot to kill Lil Wayne back in April. Wayne’s tour bus got shot up that same month. According to WSBTV reporter Mike Petchenik, neither Birdman nor Young Thug are facing charges. 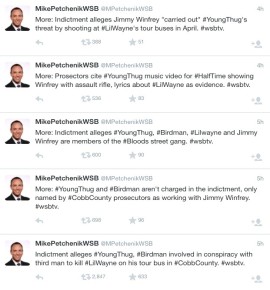 Jimmy Carlton Winfrey, 25, of Atlanta was arrested June 2 in connection with the shooting, which he did to gain “street cred” with his “Blood” gang members, according to police warrants. None of the approximately dozen people on the buses were injured during the incident.

Lil Wayne’s tour buses were shot several times while driving on I-285 in Cobb County on April 26, 2015, authorities said. (Credit: Channel 2 Action News)
Jeffery Williams and Bryan Williams were not charged in the incident, Channel 2 said, although Jeffery Williams was arrested Wednesday after allegedly threatening to shoot a Perimeter Mall security guard in the face.

Winfrey, also known as “Pee Wee” and “Roscoe,” was indicted June 25 on six charges — aggravated assault, terroristic threats and acts, criminal damage, possession of a firearm by a felon, criminal gang activity, reckless conduct and discharging a weapon near the street, according to an indictment obtained by Channel 2. (AJC)