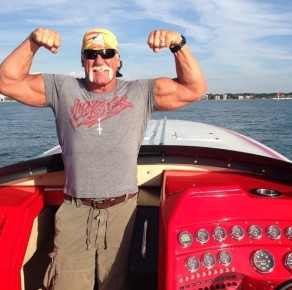 Today, a jury awarded former pro wrestler Hulk Hogan (real name Terry Bollea) a whopping $115 million in his legal case against Gawker Media, however, as we know by now, that doesn’t mean Hogan is collecting $115 milly.

Hogan, who sued the media company for $100 million back in 2012 accusing the website of invasion of privacy and other torts for posting 101 seconds of a sex tape featuring the wrestling icon and his ex Heather Clem, was awarded $55 million for economic injuries and $60 million for emotional distress, according to CNN.

And there’s a possibility for some more money on top of that, as the jury will reconvene next week to consider punitive damages on top of the $115 million already awarded.

But attorney Troy Slaten, who is not connected with this case in any way, tells E! News that after all is said and done, Hogan will probably get less than half of the judgment.

Here’s how it all breaks down…

“And then there’s taxes. The IRS treats personal injury awards like this differently depending on the character of the claim. If you are being compensated for a physical injury like broken bones, you can’t eat, nausea, physical injuries—those are not taxable. If it’s for lost wages then, yes, it’s taxable as if that money was wages.

“If it’s purely an emotional injury that does not have a physical component to it, then that is taxable—the government gets like half of that portion that is purely emotional. Just like Erin Andrews, Hulk will have tax attorneys working hard on this and they will make the argument to the IRS that he suffered physical manifestations of the emotional injury—that he couldn’t sleep, he is having nightmares, he is suffering PTSD, erectile dysfunction, he can’t have appropriate relationships, sweats, all the things he could possibly have.”

So with all that said, we’re looking at roughly $46 million in attorney fees, another $2 million in litigation fees, and assuming the remainder $67 million is taxable (which means half is getting cut), Hogan is left with—drum roll, please—$30-40 million. And yes, that is still a chunk of change, but definitely not $115 million.

Then again, there are the punitive damages, which Slaten couldn’t even begin to ball park. “It could be anything. God knows what it will be. I couldn’t even start to speculate on that. Frankly I’m shocked at the $115 million dollar compensatory verdict for showing a video for nine seconds.”

However, there’s a big chance Gawker is going to appeal, which then throws another monetary curve ball into the mix.

He continues, “That is one of the most difficult things in a lawsuit. You can win a judgment, but that doesn’t mean the money just automatically flows into your bank account…He will not see the money for a while—even years.”

Additionally, “an Appeals court could easily decide the jury was wrong and cut the award in half. If they felt that no reasonable juror should have ruled that way. Cases get overturned on appeal all the time,” Slaten tells us, explaining that they could end up just settling for the $50 million instead.

Regardless, the large judgment raised a lot of eyebrows today, especially coming after the $55 million awarded to Andrews in her Peeping Tom case against the Marriott hotel in Nashville. And it definitely sparked some interesting conversations on the Internet:

Slaten tells E! News that the main difference (aside from the actual case) between the two judgments is who they were targeting. “It’s different in the Erin Andrews case in that there’s just one defendant, and the defendant is a large company that theoretically has deep pockets. Meaning Lots of money.”

“In the Erin Andrews case, the judgment was split between Marriott and the peeping tom. The peeping tom had no flow, no dough. He had no money and so you can’t get blood from a turnip. But in this case, Gawker is a major publishing outlet and they theoretically have assets and even insurance to cover lawsuits.”

All in all, Slaten believes Hogan and Gawker should try to reach a settlement. “I think that is what they should do and that is what usually happens. You never know, you never know what another court can do. The judges that are looking at this might think that’s ridiculous like most lawyers, every single lawyer that I’ve talked to thinks this award is outrageous.”