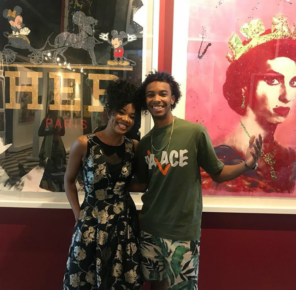 Gabrielle Union recently dropped $40,000 on a painting by a street artist named Skyler Grey. There’s nothing special about a celebrity spending thousands, or even millions on artwork, it happens everyday, but what makes this transaction unique is that the artist is only 17- years-old.

Skyler, who has sold pieces to Nick Cannon, The Game, and Diddy in the past, was in Miami to display his artwork at the Avant Gallery at the Epic Hotel. Gabrielle just happened to be at the same hotel doing an interview to promote a book. The actress found her way into the art exhibit and fell in love with Skyler’s painting of artist Jean-Michel Basquiat as Juan Ponce de Leon called “King Jean Michel”, and she just had to have it.