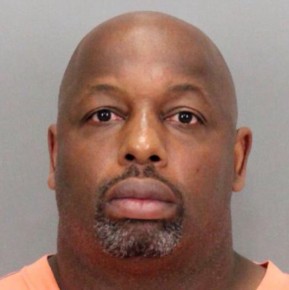 Former NFL star Dana Stubblefield has been charged with rape. The 45-year-old is facing five felony charges and will get a “substantial prison sentence” if convicte according to prosecutors in Santa Clara County, California. Stubblefield allegedly raped a woman who was described by the District Attorney’s office as “developmentally delayed.”

Authorities say Stubblefield, 45, used the caretaker placement service sittercity.com to arrange an interview for a babysitter. Before the interview, Stubblefield told the alleged victim that he would pay her for the gas, mileage and time it took her to come to the interview.
But officials said that when the 31-year old woman forgot to get the $80 he promised, Stubblefield texted her to return to his home to collect the money. According to McInerny, the sexual assault occurred when the woman went back to Stubblefield’s house.
“This was a crime of violence against a vulnerable victim,” McInerny said in a press release.
“She was looking for a job and she was unconscionably assaulted.”
The victim left Stubblefield’s house and went directly to Morgan Hill Police to report the alleged assault.
She underwent a SART exam — sexual assault response team exam, which is an evidentiary medical exam conducted in sexual assault cases.
A crime lab confirmed DNA obtained from the victim matched that of Stubblefield.(CNN)

In a statement, Stubblefield’s attorney, Ken Rosenfeld said Stubblefield and the woman had consensual sex, and that she asked him for a job and money afterward. Stubblefield’s bond as been set at $250,000.