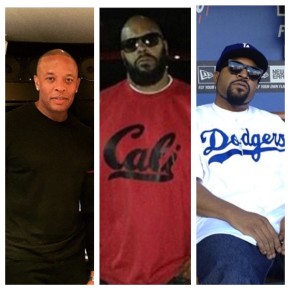 Lilian Carter, the widow of Terry Carter, the man killed by Suge Knight in a hit-and-run has filed a wrongful death lawsuit against Knight, which also names Dr. Dre and Ice Cube. The lawsuit claims “reckless corporate greed, disguised as the quest for authenticity, [led] to a foreseeable altercation that resulted in the death of a successful businessman”.

Carter’s wife and kids have filed the lawsuit — obtained by TMZ — claiming Dr. Dre and Ice Cube — both producers of “Straight Outta Compton” — hired known gang members to provide security for location shoots in gang-infested neighborhoods.
The suit claims some of the gang members incited the fight and threatened Suge, leading to his decision to roar back through the parking lot in a panic, running over and killing Carter.
The Carter family is also suing Tam’s Burgers, claiming violent crimes regularly go down in that parking lot so the burger joint should have had security.
The suit seeks unspecified damages. (TMZ)

Representatives for Ice Cube and Dr. Dre declined to comment on the lawsuit.