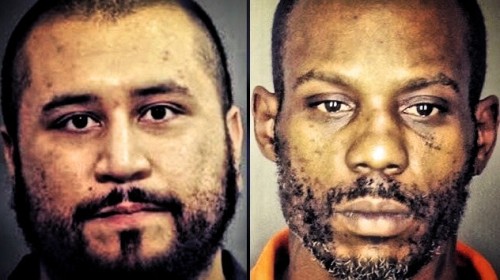 It’s being reported that rapper DMX has been chosen as George Zimmerman’s opponent in an upcoming celebrity boxing match. Contract negotiations are still ongoing. The rapper has verbally agreed to the boxing match but hasn’t signed a contract yet.

Celebrity boxing promoter Damon Feldman tells us, DMX was selected out of 15,000 applicants … all of whom wanted a piece of Zimmerman in the ring after he issued the open challenge to fight anyone willing to take him.

But no one wanted to beat Zimmerman’s ass more than DMX.

As we first reported, DMX promised to massacre Zimmerman in the ring if he got the chance. To be exact, he said, “I am going to beat the living f**k out him … I am breaking every rule in boxing to make sure I f**k him right up.” He then said he’d literally piss on George’s face.

Zimmerman might actually have a chance though — as we reported, he’s been training pretty hard for months … oh yeah, and he’s only 30 years old. DMX is 43.

The boxing match will be 3 rounds.

The date, time, and location of the fight will be announced at a news conference next Wednesday.

“The boxing match between George Zimmerman and DMX is not officially confirmed. DMX has promised to “beat his ass”, but no contract or paperwork has been signed or agreed to yet. DMX will release an official statement if and when an agreement is made.”