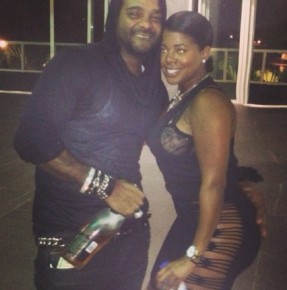 Chrissy Lamkin, star or the reality tv show Chrissy and Mr.Jones was arrested early this morning after she allegedly beat up a woman in a bar fight in New Jersey.

Edgewater PD tells TMZ … Lampkin was popped around 2:30 AM for aggravated assault and disorderly conduct … we’re told it was bad enough that the victim required hospitalization. She was bloodied and doctors had to stitch up the area above her eye.

This wasn’t pure theatrics … cameras were NOT rolling.

As for what started the fight … we’re told Chrissy got pissed that the alleged victim sat on the sofa she was sitting on and accidentally bumped into someone. Sounds like self defense to us.

Lampkin was released a few hours later … after her fiancee Jim Jones bailed her out.