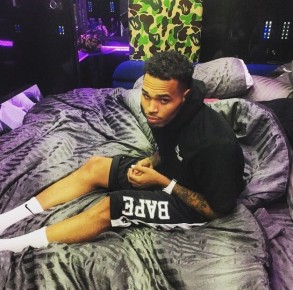 Singer Chris Brown’s Southern California home was targeted in a home invasion early Wednesday morning. Brown’s home in Tarzana was burglarized by three armed masked intruders. No one was hurt during the robbery. A unidentified aunt was the only person in the house.

The chart-topping, award-winning singer wasn’t at his home in Tarzana, a neighborhood of Los Angeles, when authorities got a call about what happened around 2 a.m. (5 a.m. ET) Wednesday, according to L.A. Police Department Officer R. Alvarez.

But Brown’s aunt was there. After hearing a commotion outside, she opened the door to find three males with handguns, Alvarez said.

The armed men forced their way into the house and locked his aunt in a closet. The intruders eventually fled in an unknown vehicle toward an unknown direction, according to the LAPD officer.

Police did not immediately say what, if anything, was taken from Brown’s house, whether his aunt had been harmed, or whether others had been in the house with her.

The incident marks the second time that authorities got involved because of an intruder in Brown’s house.

This spring, the singer came home to find a woman who, he alleged on Instagram, had broken hinges off doors, cooked several meals, written “I love you” on walls, painted her name on his cars and thrown out his daughter’s clothing. (CNN)