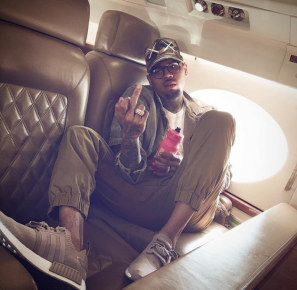 R&b superstar Chris Brown was arrested by the LAPD Tuesday after an hourlong standoff at his Los Angeles home. The singer was charged with assault with a deadly weapon after a woman claimed he threatened her with a gun. When police arrived to investigate, he refused to leave his home, resulting in what Deputy Chief Bob Green called a “long and protracted” standoff while the police sought a search warrant.

Brown’s alleged accuser is a woman named Baylee Curran, currently the 2016 Miss California Regional title holder, according to TMZ and the Los Angeles Times. Curran claims that Brown pointed a gun at her after she admired a piece of jewelry a friend of his was showing her.

“I don’t know if it was Chris’ friend or how he was related, but that’s when he told me to back away from the diamond necklace and started cussing me out and calling me names,” she told the LA Times. “That’s when Chris pulled his gun and told me to ‘Get out.’ He said ‘I’m sick of you girls, get the F out!'” (CNN)

After police served the warrant, Brown and his guests were brought outside while authorities did a protective sweep. He was then taken to the police station for processing.