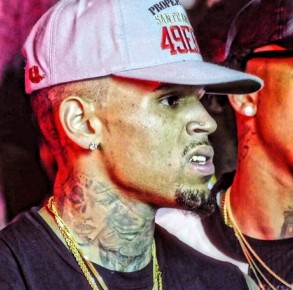 R&b star Chris Brown is under investigation for battery for allegedly punching a woman in the face in Las Vegas. A rep for Brown says that the woman’s claims are ” undeniably untrue”. According to Brown the woman is a liar and his upset that she got kicked out of his private party.

The alleged victim tells us she was at a private party in Brown’s suite at the Palms Hotel in Vegas early Saturday morning. She says she was able to get her cellphone into the suite without his security noticing and when she took a pic of the singer, he went off, yelling, taking her phone and punching her once in her right eye.
The alleged victim, whose name is Liziane Gutierrez (we’re only identifying at her request) says she left the party and called the cops a few hours later but was not taken to the hospital. Law enforcement tells us they’re currently investigating the incident and Chris is the suspect. (TMZ)

Authorities have not had the chance to speak to the singer and their official report is for misdemeanor theft (for the phone) and battery. Brown’s rep says that Liziane never had her phone inside the party and her story about Chris becoming enraged when she tried to take a pic is a complete lie.