Rising Chicago rapper Marc “Lil Marc” Campbell was murdered Friday in broad daylight. Campbell’s death comes just days after he released a video mocking the death of his rivals. The shooting took place on the 300 block of East 51st Street. Pictures from the scene showed Lil Marc lying in the street while police blocked off a portion of the road. 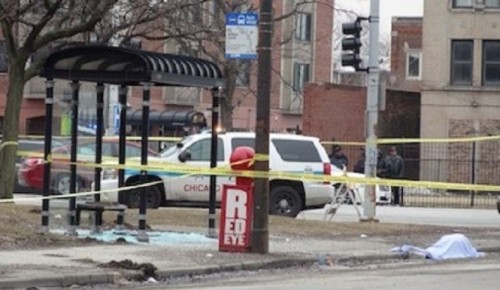 The 20-year-old was shot and killed a mere two days after he released a video called “No Competition,” which allegedly makes light of other people’s deaths. On the song he says, “Mask up, young n*ggas on dummy, catch you in broad day leave em like J Money.”
One online poster said, “Yall must not heard lil Marc competition..can’t stand on the bus stop after making something like that.”
The motivation behind the death is largely speculative and the police are still investigating.
The rapper, 20, was killed in front of a bus stop mid-day on Friday March 28 at about 1:30 pm. He was shot in the head. Lil Marc leaves behind a pregnant girlfriend.
Authorities also have theorized that the murder may be related to another shooting that occurred hours earlier that day.
The internet has continued to comment and infer to the contrary, stating that the song directly correlates with the murder of Lil Marc. The video includes a FaceTime conversation with Lil Reese, who is reportedly in a rival gang.