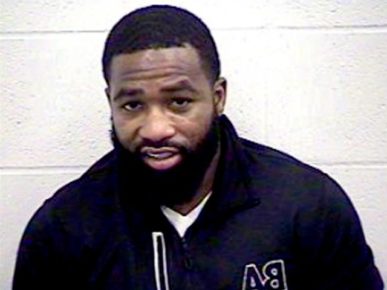 Adrien Broner was arrested and booked into the Fulton County Jail in Atlanta Monday night on a misdemeanor sexual battery charge. The incident took place at Lenox Square mall. The former boxing champ was accused of inappropriately groping a woman.

Broner denied the allegation — but after being interviewed by cops, they believed there was enough evidence to arrest him for misdemeanor sexual battery.

The 28-year-old was transported to Fulton County Jail without incident.
He’s scheduled to face a judge around 9 AM local time. His booking sheet lists him at 5’8″ and 160 lbs.

BSO is reporting the incident took place in front of a Louis Vuitton store. (TMZ)

On February 12, 2018 Atlanta Police Units were dispatched to 3393 Peachtree Road in reference to a sexual battery. Upon arrival, units spoke with the victim who advised that she had been inappropriately groped by a male later identified as Mr. Adrien Broner. Mr. Broner denied the accusations and after being interviewed was charged with Misdemeanor Sexual Battery and transported to Fulton County Jail without incident. At this time there is no additional information to provide regarding this case.