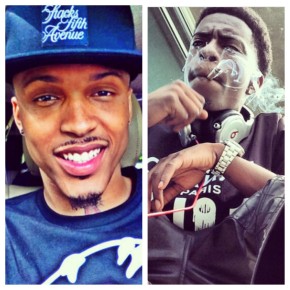 It just wouldn’t be a hip-hop show without fists flying. Straight from MediaTakeOut, there were reports that August Alsina and Rich Homie Quan got into it during a holiday show for charity:

August Alsina was scheduled to perform at a 2 Chainz charity event but he was not allowed access to the stage by Rich Homie Quan’s security while Rich Homie was performing. So allegedly August “felt some type of way” about it and waited for Rich backstage when the performance was over.

August Alsina then proceeded to confront and then put his fists on two members of Rich Homie Quan’s team, a security guard and the DJ, DJ Keem. And August definitely got them hands cause we’re told that he put somebody to sleep…

To Rich Homie Quan’s credit, he was trying to get to August Alsina and return the favor – by putting hands and feet on him, but Quan’s security held him back and wouldn’t let him into the melee.

And so who is to blame for it all???? We’re told that everyone is upset with Rich Homie Quan and his people . . . whom they think started the mess.