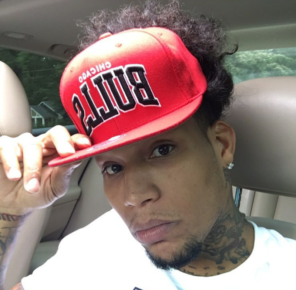 Yung Mazi, an up and coming hip hop artist affiliated with Kevin Gates’ BWA crew, was shot and killed in Atlanta’s Kirkwood area Sunday night (Aug.6) while walking to his car after leaving a pizza shop.The rapper sustained multiple gunshot wounds, and died on the scene.

The shooting happened just before 9 p.m. as Yung Mazi left Urban Pie pizza restaurant on Hosea L. Williams Drive, according to Channel 2 Action News. Atlanta police said they responded to a report of 10 to 25 gunshots.

Urban Pie is across from the Zone 6 police precinct in Kirkwood, in the DeKalb County portion of the city of Atlanta.

The suspect is a black male with dreadlocks wearing a white t-shirt. Mazi is believed to be the intended target.

Sunday night’s shooting was not the first attempt on Yung Mazi’s life, he was shot at a Waffle House last December. He was also shot in the legs in 2015.