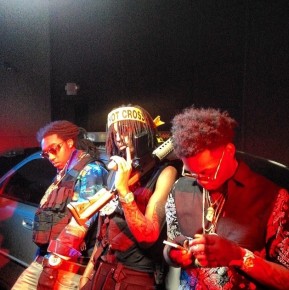 Atlanta based rap group Migos, best known for their hit songs Versace and Hannah Montana, were involved in a shooting early Friday morning in South Florida. One person was wounded and taken to a nearby hospital.

The victim, who authorities said may be a member of the hip hop group or a part of their entourage, was shot in the leg during the shootout and he was driven to Jackson Memorial Hospital. His condition is unknown at this time.

FHP Trooper Joe Sanchez said the group just left a local nightclub and were on their way back to their hotel on South Beach when shots rang out. “They were supposed to be performing at Cafe Iguanas in Broward and apparently for whatever reason there was an altercation or disagreement with management and they didn’t perform, so as they were driving southbound on I-95, according to the witnesses in the van, a dark vehicle pulled along side them and opened fire,” said Sanchez. “A member of the group was in possession of his personal handgun and he returned fire. “