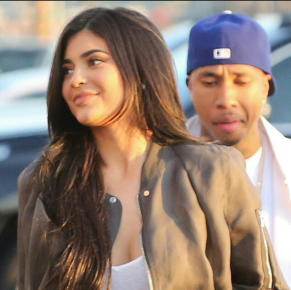 (Gossip-Grind) Are Kylie Jenner And Tyga Back Together Again?

Kylie Jenner and her on-again, off-again beau Tyga appeared to be very much on at the premiere of her brother-in-law Kanye West’s new video “Famous” on Friday.

West had debuted the track, which contains insulting lyrics about Taylor Swift , earlier this year. The video depicts her, Kim and other celebrities naked in bed with West.

At the premiere, Kylie, 18, and Tyga, 26, sat together next to Kylie’s mother Kris Jennerand her boyfriend Corey Gamble. At one point, Kylie kissed Tyga on the cheek and whispered something into his ear. She also put her head on the rapper’s shoulder.

He and Kylie had most recently split in May. A source told E! News Friday the two are “hanging out again,” while another said they “are not back together officially” but have “started seeing each other again romantically.”

Several other members of Kylie’s famous family were also in attendance, including her sister and West’s wife Kim Kardashian, Khloe Kardashian, Kourtney Kardashian and her ex Scott Disick.

Khloe’s former boyfriend French Montana was also spotted. The two have remained friendly since their 2014 split.

Kylie and Tyga stayed seated together, talking, when most people, including Kim and Scott, got up to dance. Kris and Gamble also remained seated, although she danced her in seat. They were seen leaving the venue before other family members, while Kylie and Tyga left together a couple of minutes later.

News of the teen and the rapper’s reconciliation comes soon after he posted and then deleted an Instagram photo that showed her sitting on his bed wearing the same dress she wore in her own Instagram and Snapchat pics posted the night before. He wrote, “They always come back.”